Learn ASP.NET MVC 5 Step By Step / Learn MVC - Each alphabet in word MVC 5 holds meaning and abbreviated as Model, View and Controller which is complete architecture solution in itself which sits on ASP.NET and divides Web based application into three parts, the Model, the View and the Controller to build dynamic, data-driven websites. Today after its arrival it is very much well-known way to develop application. By theory or in thought process MVC is an Architectural Design Pattern and it gets implemented as MVC 5 architecture practically when applied to projects. Design Pattern - MVC is used within the .NET Framework.

MVC 5 with ASP.NET is Microsoft Open Source which is a light weight code wise framework and helps to create different kind of web applications using MVC 5 design pattern. As days are passing MVC is creating its own space in web technologies due to its rich cool features like single page application, Powerful Unit Test Capability, Routing, Code Separation, mobile optimization, extendibility, fully adaptive rendering and many more such features. For the sake of simplicity complete whole word ASP.NET MVC is only termed as MVC 5. Each of the integrated alphabet in the word of MVC(Model, View, Controller) has its own importance and they works without dependency and helps in create a whole powerful application. Likewise there are so many features that MVC contains and with which it becomes powerful self-contained Design Pattern.

MVC 5 released as a new feature along with many other new feature within Visual Studio 2013 IDE tool. Let us discuss it out some of them as below: -

Attribute Routing : With the new MVC 5 totally different way of approaching routing with the implementation of this you will have more control over the URIs of a Web based application, as the name says Attribute routing we can implement the route definition along with the action methods within the controller class by using attributes. We can say that using attributes routes are defined.

Scaffolding : With the use of this feature code generation we fast and easily generate code to interact with data models. With Visual Studio 2013, totally new scaffolding framework is available for MVC 5. Using this new framework feature it will effectively reduce the time needed to build MVC based web application along with standard data operation. Please note that right now Visual Studio 2013 do not support generating pages for project of ASP.NET Web Forms. In order to achieve this is the only way to add MVC dependencies to your Web Forms project and make use Scaffolding.

One ASP.NET :- It is a system in MVC 5 to create new uniform project for .NET Web development. With the use of One ASP.NET in a single project it makes very much easy to work with various frameworks like MVC, Web Forms, and Web API etc. So the ultimate benefit of using the One ASP.NET project system is that you can use ASP.NET Web Forms and MVC simultaneously and not only that you can easily add WebAPI and ASP.NET SignalR within the same Web application project.

Bootstrap : By looking into rapid use of internet on mobile and other device like tablets with different sizes etc. responsive user interface is achieved with Bootstrap along with HTML and CSS and in VS 2013 it is added as by default user interface. Developed by Twitter - Bootstrap is completely free and rich library of HTML and CSS based design templates created especially for navigation, buttons, designing forms, tables etc. By using Bootstrap, webpage will get adjusted on the screen with proper resolution on any device, when site surfed by user.

Filter Overrides : One more interesting feature introduced in MVC 5 is Filter overrides which is answer to previous MVC versions shortcoming. Scenario in older versions were, if you ever want to override a filter for any single controller or an action, then apply filter one by one to each and every action or controller which make task work lengthy. But having Filter overrides feature helps to skip some specific filter created and not wants to use below but they are created at higher scope level.

And last but not the least we would also like to discuss ASP.NET MVC 5 framework also something new called ASP.NET identity it is not a full blown new feature but it indeed very useful considering and developed for modern day membership framework. With this it is providing an extension and solution for allowing users to login using their social media credentials.

Hope that you are benefited with above shared learning on MVC and new features introduced in MVC 5. If you wish to learn more on MVC 5 technology then we suggest doing a project. Now you will ask who will give newbie a chance to work on project so if that is the case with you then we suggest just relax and chill we promise absolutely you can do MVC project by sitting at home. Yes you read it correct the broad smile on your face clearly shows you agreed to our point. go through video based project series to learn MVC 5 practically, If any query feel-free to get in touch with us. 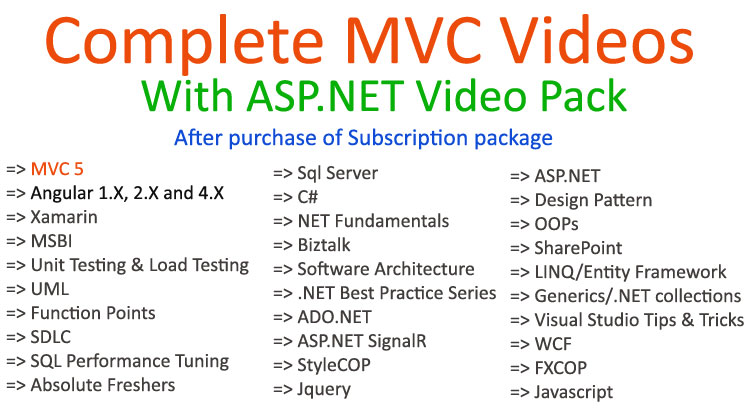